The Art of the Title Sequence

Each year, Semi Permanent engages a studio we believe to be at the bleeding edge of their field to create the opening titles for our three-day conference in Sydney. It's a chance for us to give complete creative freedom to kick off three days of ideas and inspiration at the event, and the roster insofar is impressive, including Emmy winners Danny Yount (Six Feet Under) and Raoul Marks (True Detective), MK12 (James Bond: The Quantum of Solace) and Filipe Carvalho to start. This year (founder and curator) Murray Bell enlisted Framestore, a global VFX studio with offices in London, LA, New York and Chicago, to take on the challenge:

"I've known of Framestore's work for many years – long time fan. Many moons ago I was a subscriber to Cinefex magazine and I would read of all the films Framestore would do effects for, so when the London team called me in July 2016, I was immediately open to the idea of working with them on the titles."

From that first conversation, they spoke of their admiration for the past few years of titles and the artists that created them.

"With opportunities like this, I like to keep the brief as open as possible. The quality is guaranteed, it's just steering the direction. So we agreed to give the brief to a team within each of their global offices. After reviewing all of them, we moved forward with the New York team's pitch because of its link with the theme, Designing for Change and the visually striking look and feel."

The project was pitched internally, with New York City-based creative duo Akira Thompson and Dan Solomon winning based on a concept inspired by the dark arts. Thompson and Solomon both went to school in New York City, graduating with an MFA and BFA (respectively) in Computer Arts. Though Thompson worked extensively as a freelancer, Solomon was hired "straight out of school", and they've been working together in the four years since. 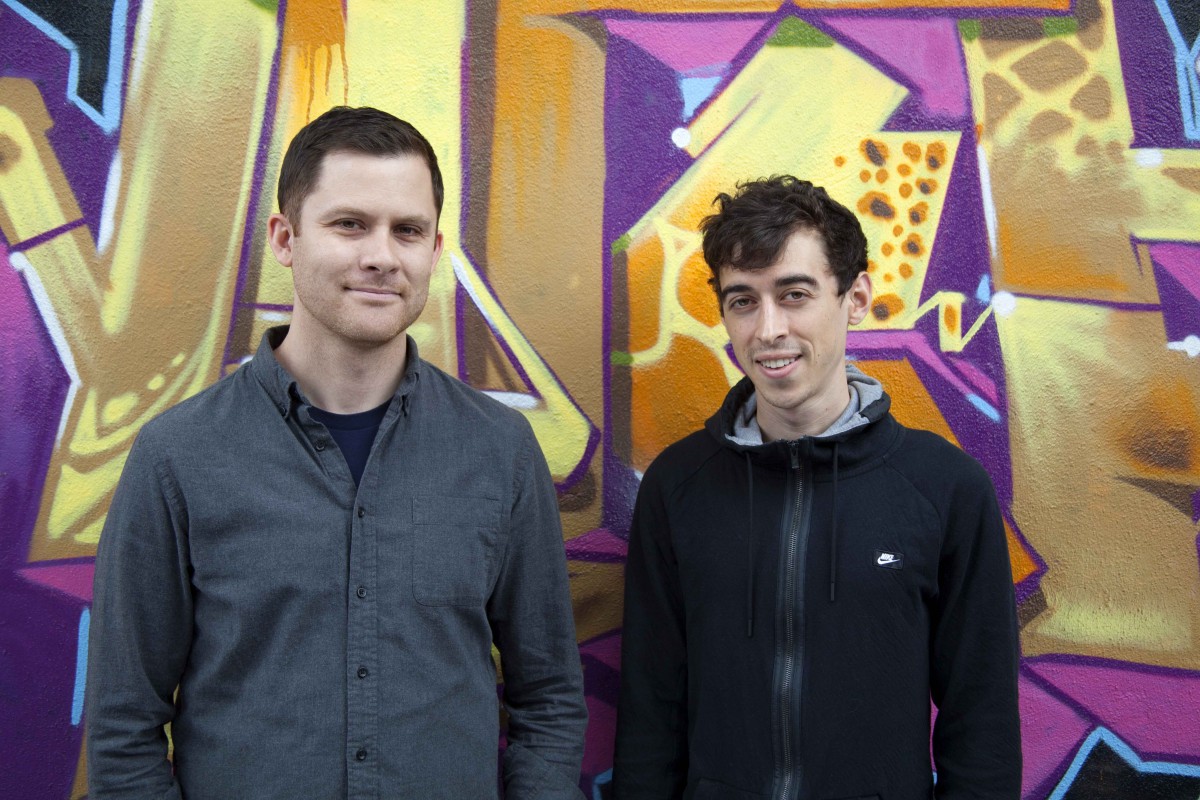 Title design is the enigma that creative studios pursue with passion. When asked about the importance of titles for creatives, the answer, to Thompson, is clear: "Firstly, you have the freedom to be experimental. You want the work to relate to the film, or the TV show, or the conference but generally, it feels like you get to be a little more creative and a little more open than a hardcore VFX shot where you have a specific goal. This is more about eye candy, something that just makes people want to be engaged."

For Solomon, it's having a non-commercial goal that pushes the work: "We're usually working on commercials, where the objective is to make a client happy and sell their product, whereas for this it's more about making it aesthetically pleasing for us, not for anyone else." "Riding on the faith that if we make something that we think looks cool, other people will think it looks cool, which is a lot of pressure", adds Thompson.

Given a blank slate to start from, Thompson and Solomon pieced together a story that reacted heavily from the nature of the event and the lineup involved. "Akira (Thompson) had the initial idea, but pretty early on we sat down and started really loosely throwing out ideas and just sketching thumbnails, trying to figure out a narrative and a way to come up with a story" recalls Solomon.

This manifested itself in the ancient technique of alchemy, or the transmutation of common matter into gold. Thompson figured this theorhetical process to be a respectful analogy for an audience that leant heavily on design: "The theme of the conference was Designing for Change, so I was thinking about change, about chemical reactions, and what the word 'change' can mean. I came up with the idea of alchemy, which is the mythical process of mixing and changing mundane elements and basic chemicals – transforming them into gold (utilising a secret knowledge passed down through generations). I thought this chemical change was a nice metaphor for the creative process, and even more specifically digital art."

"Each of the scenes in our sequence represents one of the seven chemical processes used when creating gold: Calcination, Dissolution, Separation, Conjunction, Fermentation, Distillation, Coagulation. We researched the ancient history of alchemy and tried to be as accurate as possible in our portrayal of this mythical art form." 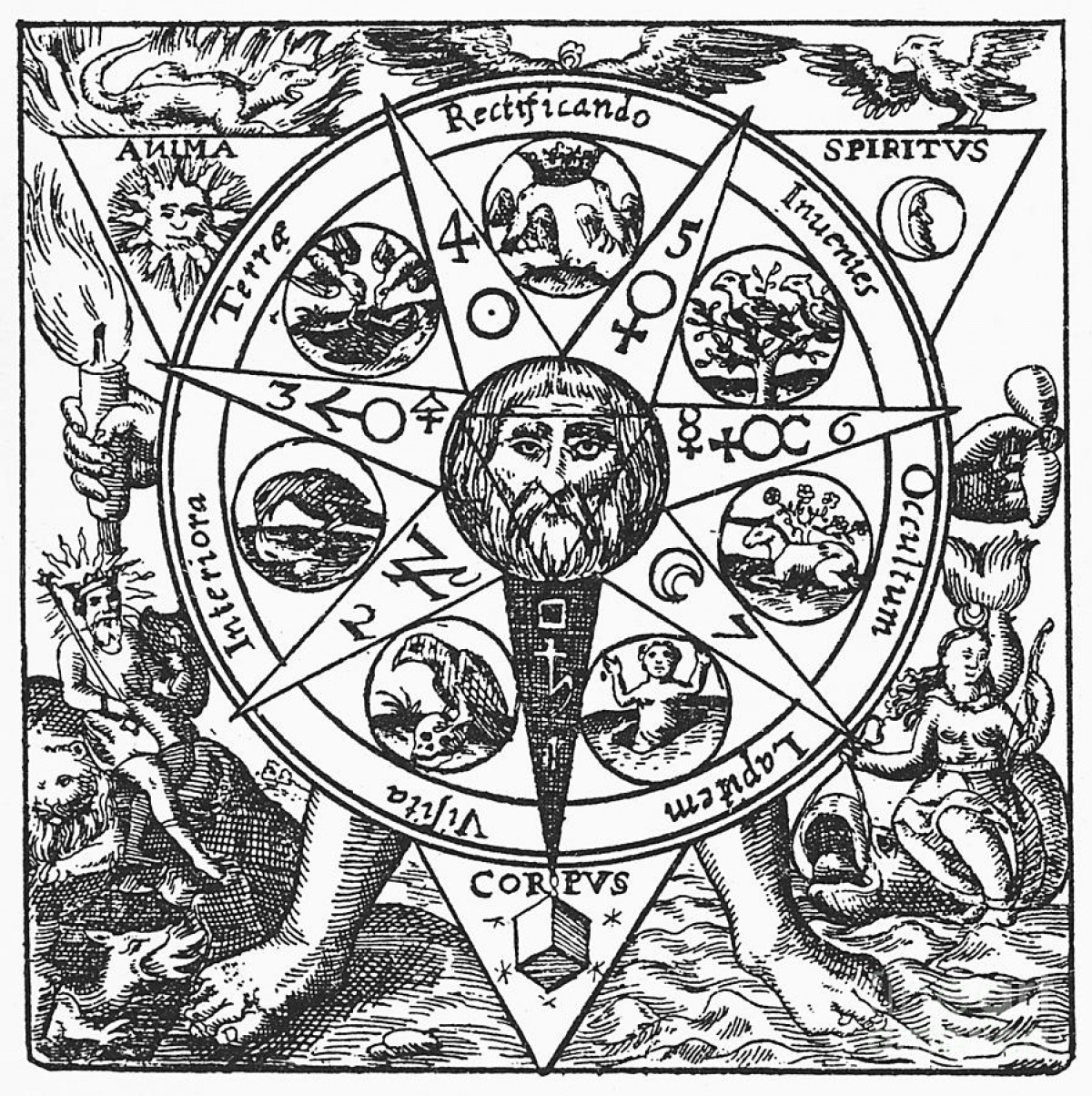 "There's all this secret symbolism, sacred geometry, and ritual. It is this mysterious sect of people who know how to speak their own language. As designers, we use this seemingly arcane software and computer code and for someone who doesn't do this work, it probably just looks like a bunch of nonsense, but we are able to communicate with each other in this unique way."

Solomon led the technical side of production, which according to Thompson took a revolving team (of up to 12 people) around two months to complete:  "Initially it was just Dan and I storyboarding, doing all the research, gathering references and doing tests. We got a little far out with experimenting compared to (what we built) in Houdini; we did a bunch of test shooting with water tanks, oil, especially with ferrofluid – a magnetic fluid that we spent a couple of Saturdays playing around with; we had all this experimental footage of liquid, metallic looking stuff that we brought into (graphics software) Maya, then we got a lot of experimental renders based on live action shots with all the weird shit we got from the dollar store: glowing goo, coloured sand, slime, nail polish, glitter. All kinds of stuff."

Seeped in deep textures and synthetic neon streaks (from our colour palette, no less), they took cues from irregular natural textures as well as precise medical technology and weaponry: "What was really great and what took this to the next level was when we got to tap into the specialists here at Framestore. We got to work with lots of people in the design department, and the CG guys, who are much larger teams full of artists who are really specialised. So once that took off we started recruiting them, and the faster guys who use Houdini which Dan and I don't use; some liquid sims, weird wormy shapes – that's the stuff we normally would not have been able to do." 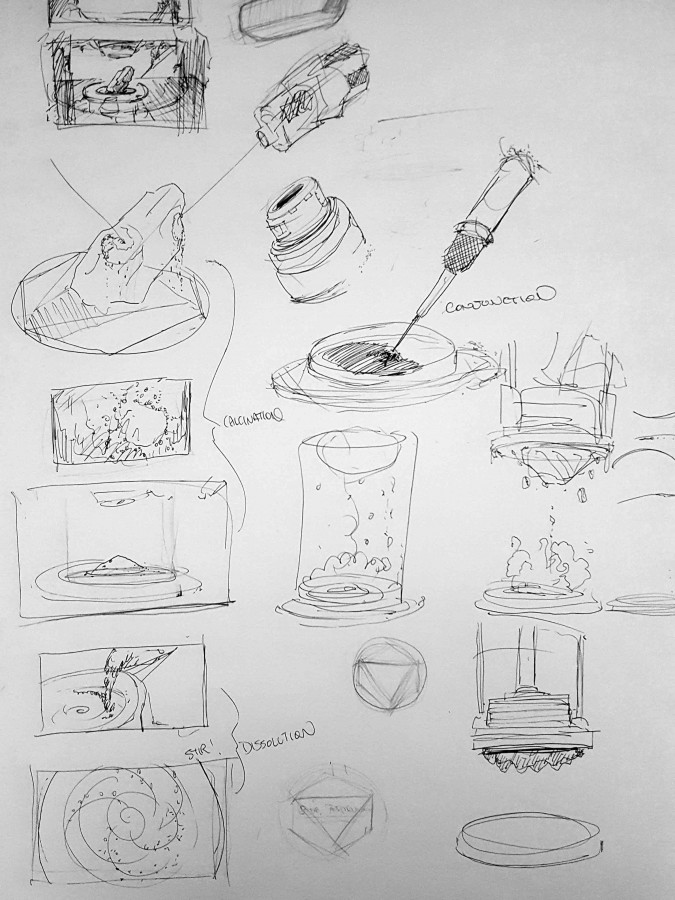 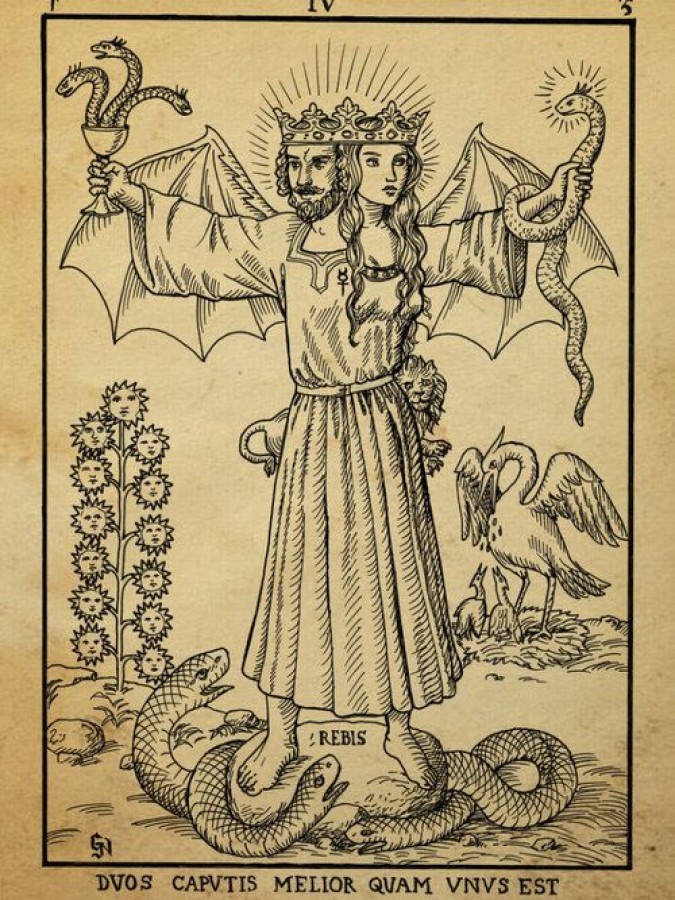 The entire piece was framed by an original soundtrack from Nylon Studios, composed by Zac Colwell: "(Dan and Akira) explained their concept of the stages of Alchemy. They mentioned a couple of really beautiful, experimental songs that they were digging and pretty much gave us free reign, musically, to support their visual story. I wanted there to be a technological, futuristic palette joined with raw, organic elements that were very elastic and fluid. I’ve been experimenting with using woodwinds as textural instruments for a few years in my band, Fancy Colors, so I tried to incorporate that into the piece. Overall, I wanted the drama of the music to be able to match the spectacular visuals, and I was very happy with the end result!"

Technology was integral to completing the desired effect on the ambition timeframe. Solomon and the team used a combination of Maya 2017, Houdini 16 and, most notably, (GPU rendering software) Redshift to complete the piece within the ambitious timeframe.

"We had to take into consideration the short time-frame and small team of artists available to us. The design department at Framestore works on PCs without access to the render farm normally used for CG productions. We eventually chose Redshift because of its speed, ease of use, and great integration and support for Maya. Since time was of the essence, we opted to use procedural textures for our shaders in order to avoid the time-consuming task of creating UVs (texture maps assigned to each 3D object) for our scenes. Redshift supports many of the native Maya texture nodes, including some 3D textures, which proved to be useful in many situations."

"We were able to easily add extra detail to our environments using procedural displacement maps with Redshift (and could) experiment creatively by modifying lights, shaders, and geometry, thanks to the quick feedback when using progressive rendering."

"As we do not have a render management system for Redshift at the moment, we were able to come up with a way to efficiently render multiple scenes overnight using 8 machines, each with a single NVIDIA GeForce GTX 980 graphics card. Using Redshift's 'Skip Existing Frames' feature, we could queue up multiple shots to render in a batch file and have each machine working to finish the renders by the next morning. The more complex scenes, which contain many overlapping reflective and refractive surfaces, had a frame render time of less than 30 minutes in most cases. Some of the wider landscape shots had frame render times as low as 1 minute."

With this project completed, Thompson and Solomon have their sights on bigger things; Thompson taking time to 'hang out' with his newborn son, while Solomon moves to help establish Framestore's Chicago office. As a company, Framestore have a string of projects on the horizon including the upcoming David Villeneuve-helmed Bladerunner: 2049 and Marvel blockbuster Thor: Ragnarok, though Thompson is adamant the dream-pair will work again: "I'm hoping we can work together as co-directors for other projects for Framestore, and do some more passion projects because this was fantastic for us. I think probably one of the coolest things I've ever worked on in 10 years of doing this." 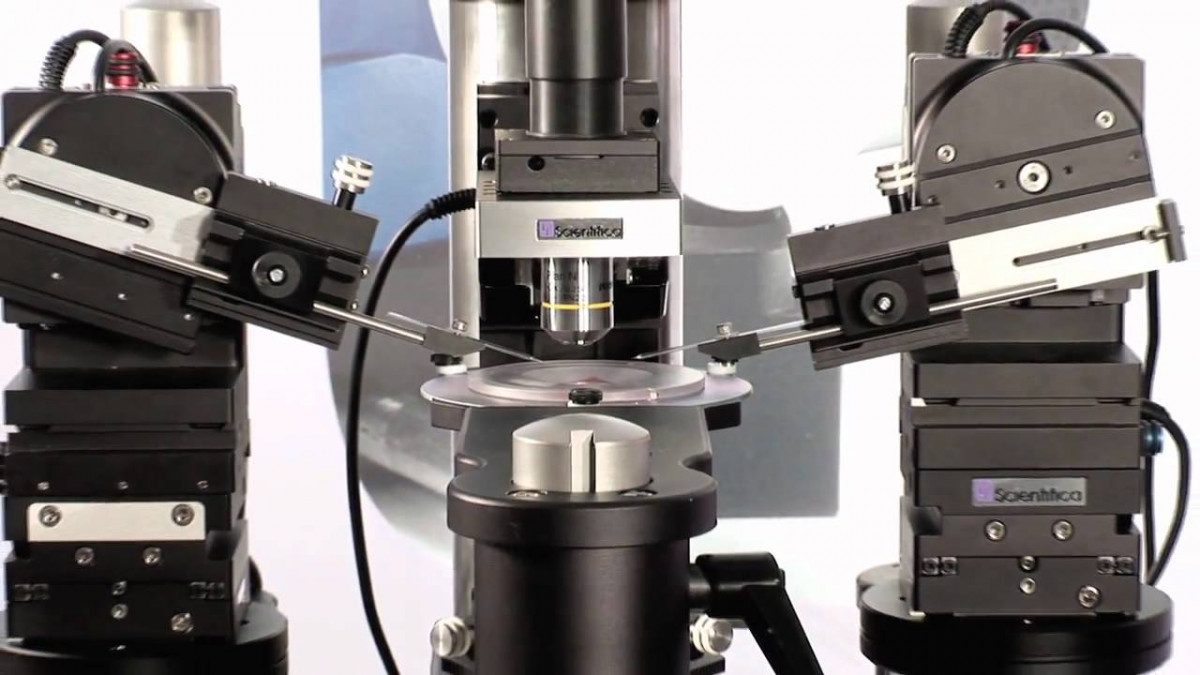 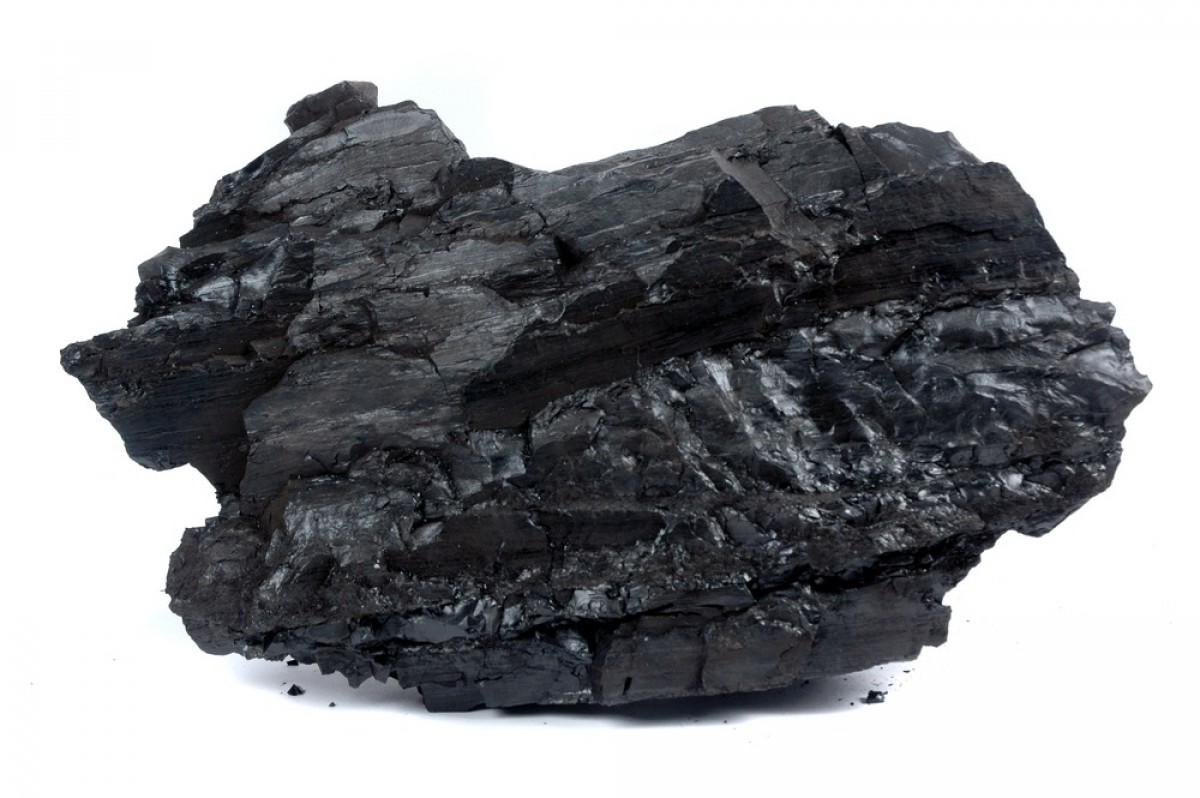