How to Take DMT and Design Titles like a boss

To whet your appetite for this year’s title sequence, we are profiling some of the visual artists from the past…

Here, we spoke to Bradley G Munkowitz (Gmunk) about how he always evolves his work, mind-altering inspiration, and the value of collaboration.

Talking to Gmunk, his restlessness and quest for progress are as palpable as the high standard to which this Semi Permanent alumnist holds his own work.

"Oh I hated the titles I did for Semi Permanent" Bradley laughs out loud, speaking from his home in San Francisco a few weeks before relocating to London. “I wanna redo them. I did them right in the middle of a huge project, and I just… I thought they were dumb.” After raving about the work of other SP title designers, Bradley admits that harsh self-criticism is his standard operating mode. “Whenever I make something there’s two things that happen. One thing is I focus only on the negative and I try to improve and learn. The second thing is I just throw [the work] up on my website, and move on. That’s why my collects are as thorough as they are - it’s like an archive where I’m putting things to sleep, like, ‘you’re dead to me now’. That’s why I have every single thing that I’ve ever done all the way to May of 2000, which is 16 years ago, on my website.”

“Oh I hated the titles I did for Semi Permanent” 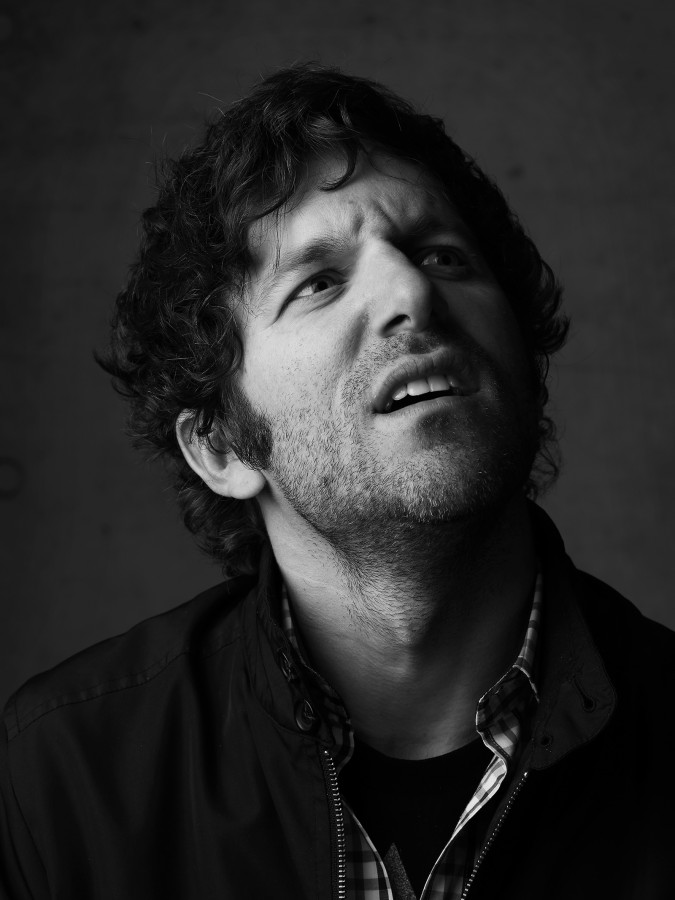 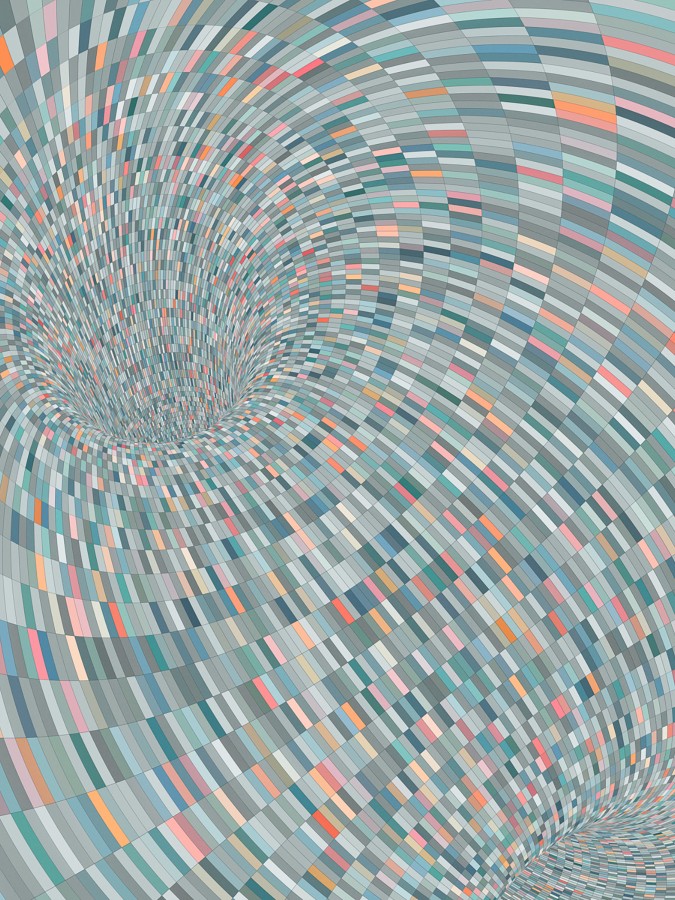 A quick flick through Bradley’s online portfolio and it becomes clear he progresses through different, distinct phases. Last year’s clips - like his Semi Permanent title sequence - are a string of works with virtually no effects whatsover, their dynamism coming from on-site light and movement. “I’m definitely on the light kick right now” Bradley confirms. “I think it’s because the influences around me in San Francisco are all lighting designers. My crew here – wherever I go, I always kind of have a crew that I run with. I liken it to graffiti writers who go out with the same crew, I collaborate with the same people up here and a lot of them are really into the lighting. Before I moved up here, I started collaborating with a guy in Los Angeles who runs a lighting company, and we collaborated on a bunch of stuff like the Semi Permanent titles.” 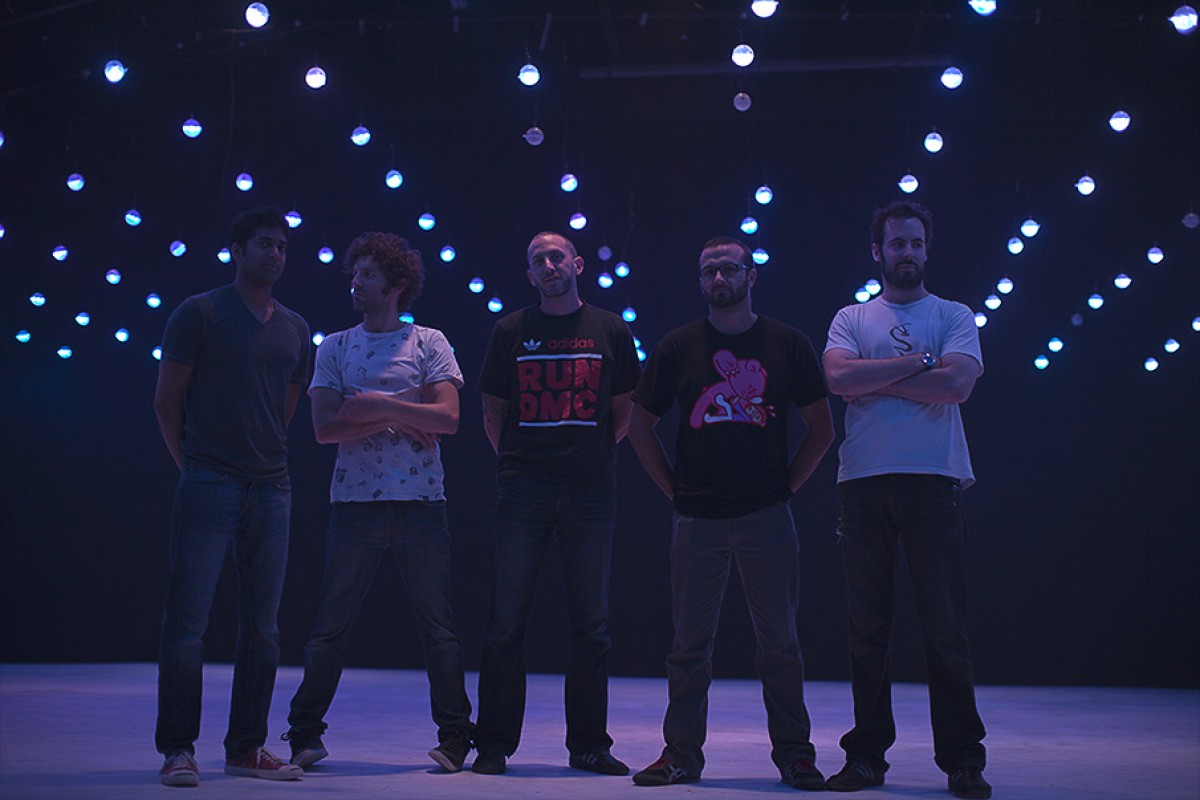 Outtakes from Flash on the Beach

As Gmunk explains, collaborations are vital to his working process, helping him progress in new and unexpected directions. Yet beyond collaboration with other creatives, clients often dictate the way Bradley’s work will move, and grow… or stagnate. Many often ask him to repeat what he’s already done.

“There’s certain waves” Bradley confirms, “like, in 2013 I did this ridiculously simple little LED tunnel thing for a title sequence in Amsterdam. And that turned into a call from Adobe who said, ‘we really liked that light sculpture you made – will you do a logo remix?’” Those jobs led to calls from Microsoft and Samsung for similar work. 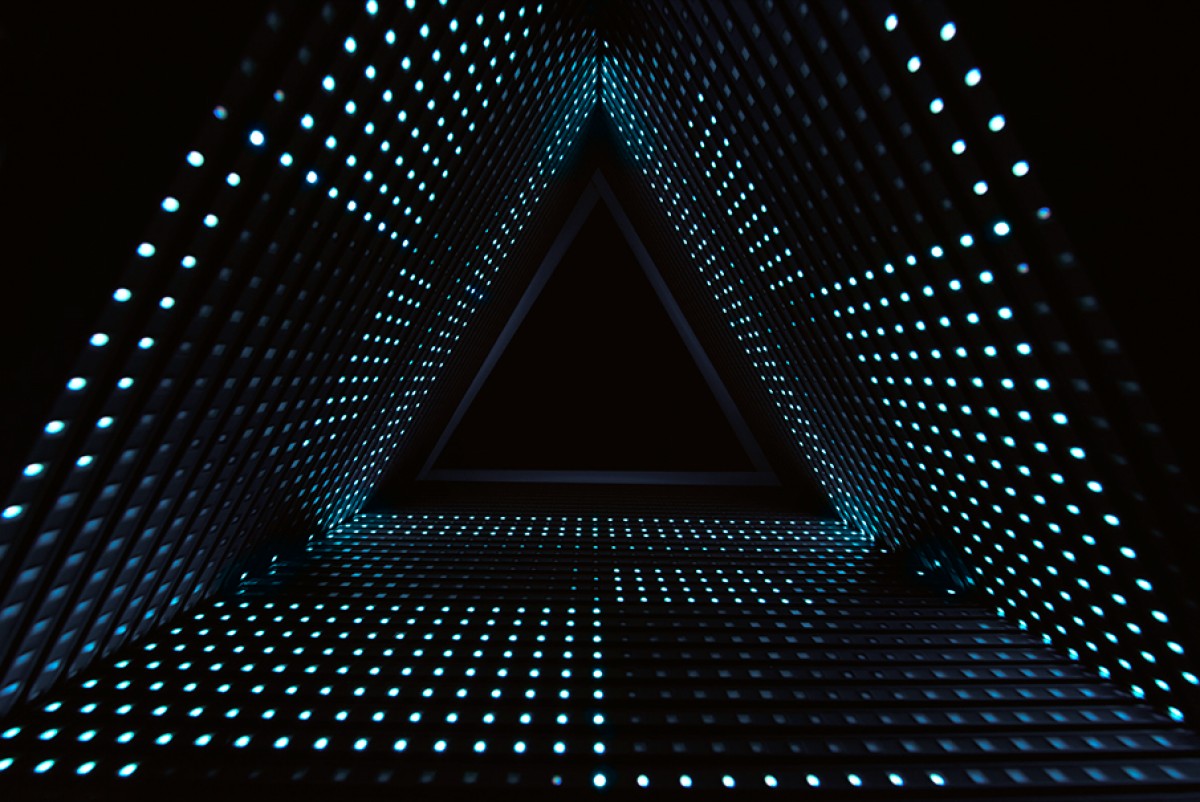 But does it ever get old, being asked to repeat the same thing? “Yeah… that’s how it was with interface work”, sighs Bradley. “After Tron and Oblivion especially, I got hit up by every single data vis company on earth to be like, ‘hey, we really loved your Oblivion UI, we want you to do this for our data vis company’.” After some positive and productive work, Bradley’s wave of UI jobs came to an abrupt end with a thorougly unenjoyable job. “But now I find that I’ve actually been saying yes to a lot of UI work and outsourcing it to a team that I’ve built to do UI work. So now I have a team of three or four people that I can have do all the design work and I just direct them, and that’s been actually really great, it’s actually been really fun."

"I wanna produce as much work as I can so when I’m 60 years old and teaching at a university and maybe doing one to two projects year, I have this just like ridiculously packed portfolio where I’m like, ‘yeah, I did do it’."

One constant throughout Bradley’s ever-evolving work has been the influence of the intense psychedelic substance DMT. “As I get older I’m a little bit more into the ayahuasca stuff than DMT” Bradley explains, “just because it’s a little bit more of a deep dive, a little more soulful. But this latest series that I’ve been doing is heavily inspired by DMT. It’s changed my aesthetic forever since I started smoking it in 2008” Bradley continues, “but it’s something that, no matter how hard I try, I can’t replicate – I can’t visually represent the things I see on it. It’s just too hard! It’s such a detailed place that it’s tough. But I’m gonna continue to just chip away at it. It’s fun to set impossible goals and just fail consistently at them.”

Moving forward, Gmunk is noticing that his age is partially dictating what he makes, and how. “I’m finding that I need to change my skills a lot and evolve with my age y’know? Back in 2004 - when I just had, ridiculously, a lot more energy – I would do things like go into photoshop and make 50,000 layer comps and do all the really, really intensely hands on motor skill stuff. I am 40 and I just can’t do that shit anymore. But I work smarter and I learn tools and collaborate with people that allow me to actually just produce more.” 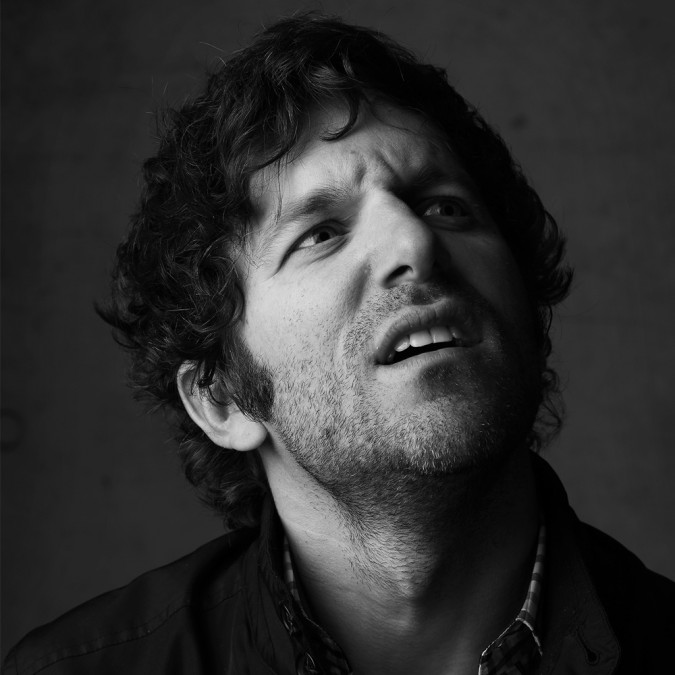 Bradley 'Gmunk' Munkowitz, the guy who's going to make your day (or night)

This ever-restless artist plans for the next phase of his evolution to be in sharp contrast to his self-imposed sabbatical from 3D and post – taking what he’s learned from live action and transfering it to CG in 2016. “I’d like to start working with building practical sets and architecture with embedded lighting systems”, explains Bradley, arranging for built structures and lights to drive the action of a live shoot. “And just freeing the camera a little bit” Bradley adds, “and just really, really playing. I wanna produce as much work as I can so when I’m 60 years old and teaching at a university and maybe doing one to two projects year, I have this just like ridiculously packed portfolio where I’m like, ‘yeah, I did do it’.

"Sometimes I think more about the title sequence than the actual show. Like the True Blood titles that Rama Allen did, y’know, fuck that show, but the titles were amazing."

Gmunk has his short and longterm #goals in sight. But what’s next for title design? “I think that title sequences are becoming a lot like music videos where they stand on their own - there’s a whole genre of them now,” explains Bradley. “Sometimes I think more about the title sequence than the actual show. Like the True Blood titles that Rama Allen did, y’know, fuck that show, but the titles were amazing.” Gmunk adds that great titles are incorporating narrative elements – a hook, to keep viewers interested, and wanting an outcome. Narrative elements in the SP titles by Raoul Marks alongside beautifully crafted images, and the fact that Marks completed the whole package – including music - himself, created what Gmunk calls, “probably one of the best title sequences ever done - just a ridiculous display of talent”. “I think the future of title design is a lot in music and establishing a mood,” Bradley points out. “Like the True Detective titles are very successful in that.” Deft use of music helped make the MK12 sequence another favourite of his (MK12 is next up in our interview series – stay tuned!). And technology is helping, dramatically. “The Octane render which is completely transforming motion graphics right now… All these designers are doing tremendously beautiful renders, and physical-based global illuminated renders. The game is changing." 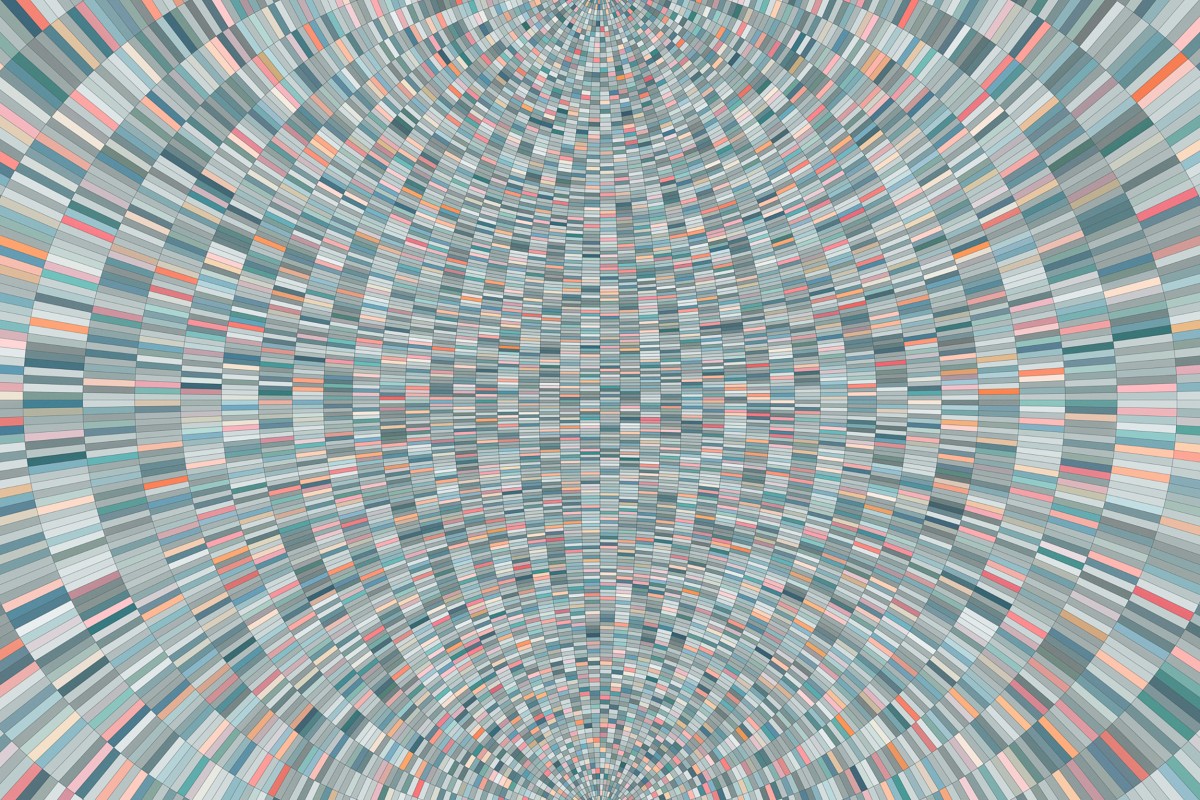