Takashi Murakami and the cure for restlessness

How does one deal with the restlessness that drives their work?

It’s difficult to think of a figure that embodies ‘restless’ more than Takashi Murakami. At 57, the prolific Japanese artist, designer, filmmaker and cultural phenomenon continues to work at a dizzying pace, challenging his contemporaries both conceptually and on sheer volume alone.

Murakami is in Sydney to help launch Japan Supernatural, a new exhibition from the Art Gallery of New South Wales exploring the long-held Japanese obsession with ghosts, ghouls and monsters. His inclusions in the exhibition (alongside works by Kaikai Kiki resident Chiho Aoshima and legendary 18th-century artist Katsushika Hokusai) include two large-scale works of impossible detail; one of which the gallery commissioned for their upcoming Sydney Modern expansion project. As we talk between his two five-metre tall sculptures of Oni or Japanese trolls, he's right at home. 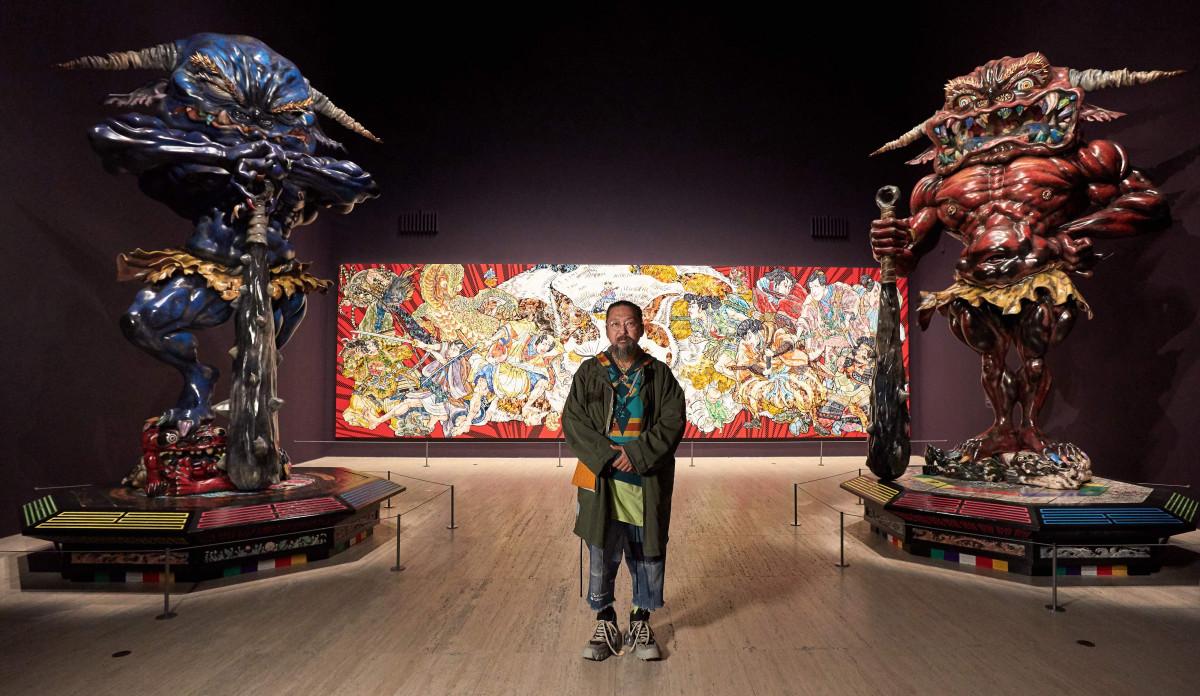 Long respected at both the high-end and street-level, Murakami is in a unique position for someone of his level. He is undeniably famous, able to do as much or as little as pleases with no shortage of collectors willing to fund his ambitions. But he is also restless, and unable to wholly commit to what his high-art and low-art audiences expect of him. “I can’t focus on one thing, which is why I do everything” he says, referring to the dozens of projects fizzing away at his Japan studio and collaborative space ‘Kaikai Kiki’; think fine-art pieces for The Gagosian, street-level works for DIY exhibits like Beyond the Streets, collaborations with Off-White or films for superstars like Billie Eilish and you're scratching the surface. “I can’t even relax with my family. I went on a holiday to a quiet island and was on my phone the entire time scrolling Instagram or talking to my team. It’s very bad.”

“Actually, I have no talent" he adds, with zero hints that he's joking. "I needed to work very hard over a long time to get the chance to do what I do. That’s why I stay in my brain and keep control of my ego.”

Ego is a topic that is constantly referenced as a benevolent force threatening rather than enhancing his work. Even at his level of success, this obsession with the fragility of one's perception of the world is of great importance; and in today's cultural economy, social media is the great leveller. “Watching Instagram and Twitter now is a good exercise for training my brain to throw out my ego,” he says, referring to its self-service nature as both an accelerator of work and a huge barrier to not losing control of your own curation.

Though prolific, it's this lack of ego that has allowed him to collaborate with some of the world's most recognisable names and connect to pop-culture in a way that few fine-artists are able to do; Louis Vuitton, Pharrell's Billionaire Boys Club, Uniqlo and Drake's OVO are a few of those who have sought out his incomparable eye for consumable world-building.

What makes him different is the sheer diversity of output — not in the realm of gallery-level art but through music, film, objects, fashion and collectables from the affordable to the museum-worthy. He defines success in this process as the ability to deconstruct your own vision to re-assemble it with that of another. “It’s easier with, say, a musician, because musicians and visual artists use completely different brain systems,” he says. “There is a dual understanding — they are a creator, I am a creator — and we can work together toward the same target. Visual artists are more difficult to work with, as are brand new clients who have little understanding of his, or any, creative process. You really need someone who understands how to communicate using the same creative language that you do”.

A primary collaborator of late, Virgil Abloh comes up as an anomaly because his distinction as a designer of function is a perfect match for Murakami’s ornamental tilt. In many ways, their partnership seemed an inevitability; both collaborated heavily with Kanye West (West’s ongoing fascination with the artist included having him design the cover for Graduation, Abloh was the former creative director of his DONDA creative team), both have worked closely with Louis Vuitton (Murakami’s pieces from 2003 onwards are considered landmark design artefacts; Abloh is now menswear artistic director), and both share an affinity for pushing the bounds of creative collaborations across disciplines, forms and spaces. “He’s different because he’s both a functional designer and visual creator,” Murakami says of the Chicago-based figurehead. “We see the same target, but from two very different perspectives.”

Material innovation seems something he’s interested in, considering a history of sculpture and painted works reliant on aluminium, silver, gold leaf, wood, glitter and whatever other building blocks he deems necessary for a piece to succeed. Seeing as though we’re standing under two towering, glittery trolls, I wondered how an artist known for his ‘superflat’ theory constructs in the third dimension. "I make models in clay and we blow it up, but we simply use the materials that are best suited to the story of the piece" he says, pointing to the sculpture as a mix of plastic, steel and glitter (contemporary) as well as wood dried over 40-years (traditional). I ask about his evolving ideas for materials, referring to a long-held interest in using plant biology to construct new types of textiles. “You know how Dr Lecter makes his mask in The Silence of the Lambs? It’s kind of like that” he laughs. “I’m a very creepy guy.” 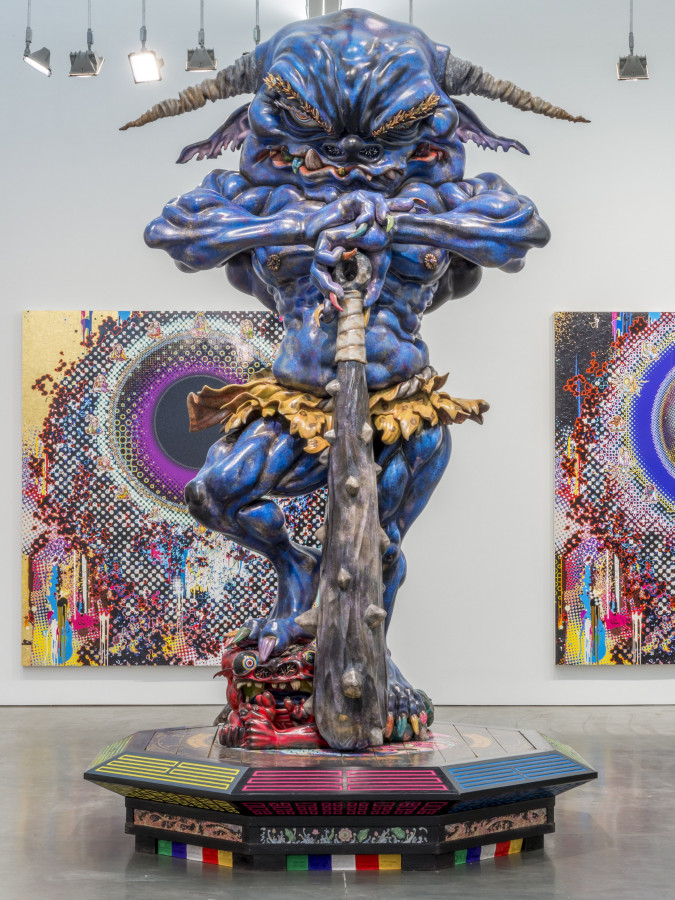 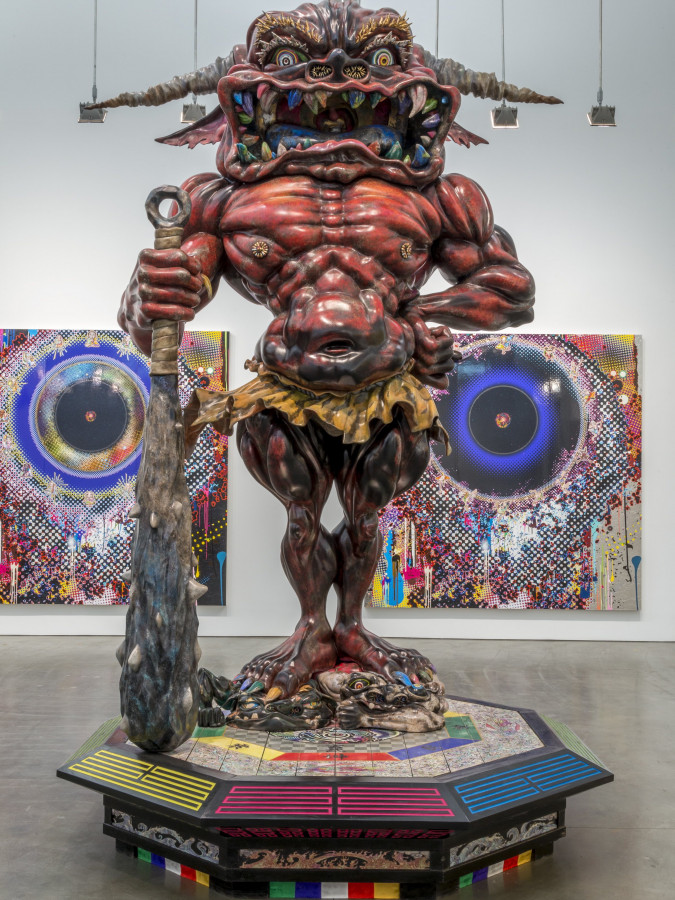 Kaikai Kiki is known for its high-volume output while Takashi himself is constantly jetting around the world exploring new places, people, cultures and creative executions. I asked how one filters out the sheer volume of references and inspiration to stay focused and definitive in what you are doing (when a piece like the AGNSW commission takes a year to create, surely ideas must evolve in the process). “I have trained myself to create complete emptiness in my brain," he says. "From there, you select a new idea; we have a very good design team who are free to suggest new things, and we make decisions step by step towards the final product."

I asked again if he had any tips for how others could deal with their restlessness to create good work. “I watch a lot of Netflix” is his response. “Star Trek, Mindhunter and Black Mirror.”

So for anyone who is feeling restless out there, that’s how you do it.