Photographer Michael Muller has built his career around extraordinary encounters. Raised in Northern California, he spent much of his childhood in Saudi Arabia, where his father, an amateur photographer, oversaw the building of the port city of Jubail. In his mid-teens – and 50 countries later – he began taking photos of professional snowboarding, a passion that quickly became a profession. By 22, Mike had established himself as a leading entertainment and fashion photographer. His celebrity portraits of Joaquin Phoenix, Brad Pitt, Jeff Bridges, Robert Downey Jr., Gwyneth Paltrow and Scarlett Johansson (among hundreds of others) have graced the pages and covers of Vanity Fair, Elle, Rolling Stone, Esquire, Interview, and the New York Times Magazine. Mike has created iconic images for movie posters (think The Avengers, Inherent Vice, Guardians of The Galaxy, Spiderman) and also developed his own iPhone app – Mullerphoto – to help users edit their photos in his distinctive style. In the last decade, Mike has plumbed the ocean’s depths to create a spectacular portfolio of underwater shark photography. His method (or perhaps madness) involves approaching sharks with a patented seven-bulb, 1200-watt plexi-encased strobe lighting rig, developed with NASA engineering. Oh, and no cage. “I knew that I couldn’t bring the great white to the studio,” Michael has said, “so I had to bring the studio to the great white.” 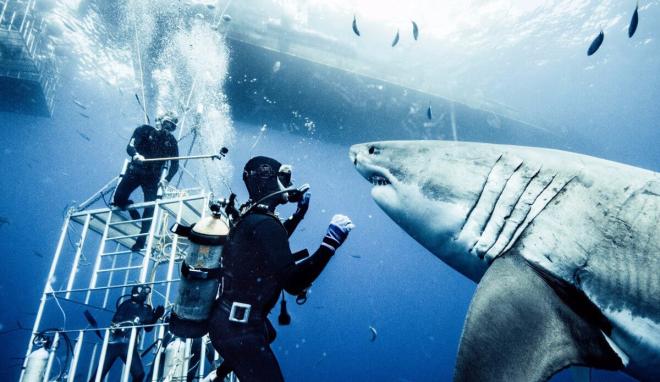 The VR filmmaker, adventurer, A-list photographer (arguably best-known for Rihanna’s Unapologetic album cover and many Marvel movie posters) and SP Auckland speaker is on a mission to put sharks in schools, virtually, and really change the planet for good.