While dav has enjoyed designing future visions in feature film for many years now, he is now very excited to have joined IDEO to build things that exist right now and actually work in real-life. He’ll share some observations on creative collaboration in both Hollywood and “the ‘Valley”, and speak to some of the new directions IDEO is currently pushing design thinking.

Dav began his career designing interactive digital experiences by day and cinematic/theatrical experiences by night, including a self-editing film which debuted at the Frameline Film Festival, and a computer-aided improvisational Butoh Dance performance supported by the Rockefeller Foundation, performed in the US and Europe.

He then dove headlong into linear storytelling for film and commercials, helping found The Orphanage, a film studio in San Francisco, CA. The Orphanage worked on everything from Sundance shorts and indie pictures to summer tentpole blockbuster features including Iron Man, Superman Returns, The Day After Tomorrow, Charlie’s Angels Full Throttle, Hero, Jackass: The Movie, The Host, Live Free or Die Hard, Red Cliff, You Don’t Mess with the Zohan, Hellboy, Grindhouse, Sky Captain and the World of Tomorrow, Sin City, and Avatar.

Dav was able to wear many hats while at The Orphanage, including writer, director, creative director, design lead, title sequence designer and visual effects supervisor -- although when push came to shove it was distilled into the simple moniker, “The Pink Sheep of The Orphanage”.

He’s perhaps best known for his work which combined his love of interactivity with his love of narrative storytelling as expressed in future designs of user experience found in films such as Iron Man, The Hunger Games, Avatar, and Transformers: Age of Extinction.

While he would gleefully spend another lifetime or two creating pretty pictures on film, in the past year he has shifted gears by joining IDEO as a creative resident and senior design lead. At IDEO he has the opportunity to work on both real and imaginary projects including bionic prosthetics, chocolate treats, the future of vision, adherence programs for HIV+ youth, and redesigning judaism... yes, you heard me right, redesigning judaism.

Dav also enjoys teaching (as well as being taught), and has done so at institutions such as the American Film Institute, California College of Arts Graduate Design Program, and the University of Performing and Visual Arts, Prague, Czech Republic. He has spoken at events such as the San Francisco Film Society’s International Animation Festival, The Film Society of Lincoln Center, and American Cinemateque, and looks forward to becoming more involved with the d.school at Stanford University.

Lately dav finds his biggest challenge herding two orange-haired boys who have the energy of a small implausibility of wildebeest... although the laser-cut skate ramp he just built seems to be slowing the ‘beests by burning upwards of a few thousand calories per day.

A Taurus on the cusp of Aries, dav enjoys sunset jaunts along the beach, cooking and surfing. 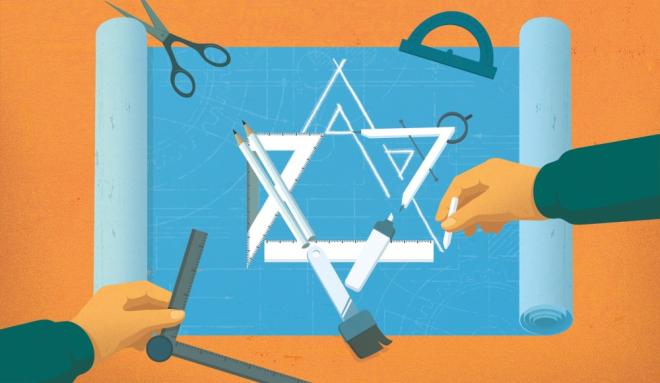 Close Encounters: What happened when IDEO & Futurist Dav Rauch got together for Shabbos